The United Arab Emirates established diplomatic relations with the Federal Republic of Germany in May 1972. UAE Diplomatic representation in Germany dates back to 1976 when the first UAE Embassy was initially opened in Bonn, West Germany, and subsequently in Berlin folllowing Germany’s reunification. With the enhancement of bilateral relations, diplomatic representation expanded to include the Consulate General in Munich and the Embassy branch in Bonn. 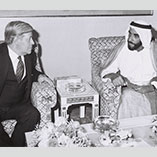 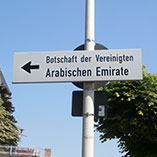 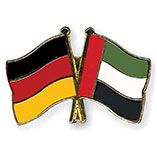 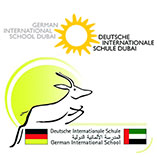 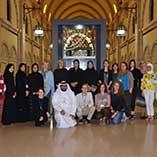 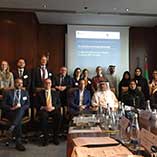 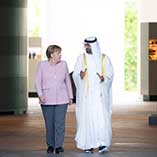 
Establishment of the United Arab Emirates with Sheikh Zayed as President


The UAE establishes diplomatic relations with the Federal Republic of Germany


The UAE and Germany sign agreement upon strategic partnership


UAE and German governments agree to an energy partnership


Both countries sign joint declaration of intent in Berlin


Expo 2020 is taking place in Dubai with strong German representation

Our countries have convergent interests in many global and regional matters and have worked together in the United Nations and other international fora on issues ranging from fighting terrorism to stabilization in Iraq and Syria and Afghanistan and the protection of the environment.

The official and unofficial delegation trips and visits, the exchange of ideas and the mutual consultations in regard to regional and international matters are a distinct expression of both countries’ strong and sincere will to advance and deepen the bilateral relations. Both countries are convinced of and committed to the importance of their cooperation for the sake of fostering international peace and global security, both of which are necessary requirements for the economic prosperity of the world.

The unanimity between both governments reached its climax with the signing of a memorandum of understanding in April 2004 by then Deputy Prime Minister of the United Arab Emirates, H.H. Sheikh Hamdan Bin Zayed Al Nahyan, and retired Federal Chancellor Gerhard Schröder. Since then, this memorandum has been the foundation of the advancement of the cooperation of both states in all areas. The memorandum is the foundation for the political consultations between both governments.

During Federal Chancellor Angela Merkel’s visit to Abu Dhabi in May 2010, H.H. Sheikh Khalifa Bin Zayed Al Nahyan, President of the United Arab Emirates, highlighted the UAE’s wish to further expand the bilateral cooperation between both countries in all areas. The Federal Chancellor stated the United Arab Emirates is Germany’s most important trade partner in the Arab world and declared that the strategic partnership between both countries represented a model for all German-Arab relations. The significance of the Gulf region has in all respects been increasing not only for Germany, but for the entire European Union.

On the occasion of this visit, the UAE and Germany issued a joint statement in which they reiterated their unequivocal rejection of all forms of terrorism that represent a threat to international peace and stability, and ensured cooperation in matters of security policy. Crown Prince Mohammed bin Zayed Al Nahyan and Chancellor Angela Merkel also emphasized the friendly bond and stable partnership between the two countries.

Strategic Economic Cooperation between the UAE and Germany

STRATEGIC PARTNERSHIP GERMANY-UAE Germany and the UAE have maintained close and friendly relations since 1972, during the course of which economic cooperation has always played an important role. The business activities of companies in both countries are effectively supported by continuous high-level dialogue. A strategic partnership was agreed upon in April 2004 and regular political consultations of the Foreign Ministries in January 2009. The purpose of this strategic partnership has been affirmed by both sides to help create greater security, stability and prosperity for both countries and the region as a whole. In recent years, a significant number of high-level visits and a lively exchange of delegations have taken place. To further strengthen their ties, both countries signed a joint declaration of intent on the occasion of the visit of Crown Prince Mohammed bin Zayed Al Nahyan to Berlin in June 2019.

The strategic objectives and priorities of economic cooperation are defined by the two respective governments during meetings of the Joint Commission for Economic and Technical Cooperation. The Joint Commission's most recent meeting took place in June 2019 in Berlin. The delegations were led by the two ministers of economic affairs Sultan Bin Saeed Al Mansoori and Peter Altmaier. The main topics discussed were issues of mutual easing of market access and diversification of goods and services to be exchanged. In addition, both governments committed to encourage their companies to strengthen cooperation in energy, climate, infrastructure, metrology, health, education and vocational training, and to make adequate investments. A key focus was also placed on the ongoing preparations for the World Expo 2020.

In January 2017, in Abu Dhabi, both governments agreed to an energy partnership. The aim of this partnership was to strengthen bilateral dialogue and practical exchange in the fields of renewable energy, energy efficiency, electricity market development, e-mobility and sustainable transport, as well as research and development in the energy sector. The cooperation incorporates delegation visits, expert workshops and other event formats that provide a platform for exchange between government officials, business and science representatives from both countries. Overall, the economic dialogue has intensified considerably in the recent past.

The United Arab Emirates is Germany's most important Arab trading partner, while Germany is the UAE's largest European trading partner, accounting for about 22% of total Arab-German trade. Germany's main export goods to the UAE are aircraft, cars, machinery, electrical appliances and chemical products. German imports amounted to around 1.2 billion Euros in 2018. These are mainly aluminium and petrochemical products (Germany does not import crude oil from the UAE). The non-oil trade between the two countries recorded a total growth of 60 percent from 2010 to 2017 and reached around 13.45 billion US dollars in 2017. Hundreds of German companies are now operating in the UAE, as well as 14,000 German citizens living in the UAE and contributing to the country's development process.

According to the German-Emirati Chamber of Commerce in the UAE, products “Made in Germany” are highly valued and are associated with particularly high-quality standards, reliability and state-of-the-art technology. In addition to its motor vehicles, Germany is known above all for machines that enjoy an excellent reputation and are considered to be reliable, durable and technologically advanced. Good business opportunities open up for German companies in the energy sector, especially in renewable energy and generators, and in environmental technology, such as waste disposal, recycling or water treatment. In the healthcare sector, German companies are sought-after partners with their modern medical technology and comprehensive range of services. Germany is also very sought after for medical tourism.

Since May 2006, the Federal Republic of Germany’s cultural institute, Goethe-Institut (GI), has been represented with an Institute for the Gulf region in Abu Dhabi Certified Goethe-Institut German classes have also been offered in Dubai since 2007.

Literature is at the forefront of bilateral cultural cooperation. The annual Abu Dhabi International Book Fair (ADIBF) has cooperated closely with the Frankfurt Book Fair.

The Abu Dhabi International Book Fair is the most professionally organized, most diverse, and fastest growing book fair in the Middle East and North Africa. Abu Dhabi is the motor driving the professional and commercial development of the regional publishing industry, and is financially and philosophically committed to the long-term expansion of the global book business. In 2019, the Department of Culture and Tourism - Abu Dhabi (DCT Abu Dhabi) has announced Germany as Guest of Honour for the 31st edition of the Abu Dhabi International Book Fair (ADIBF) 2021.

In 2009, a memorandum of understanding was signed between the Johannes Gutenberg-University Mainz and the Kalima Abu Dhabi section to foster the translation of German literature. Each year approximately 20 books are translated into the Arabic language and presented during the Book Fair Frankfurt and the International Book Fair Abu Dhabi. Since the beginning of this unique and long-term project, more than 150 translations of novels have come into life.

In the area of museology, the Sharjah Museums Authority, Staatliche Museen Berlin / Stiftung Preußischer Kulturbesitz, the University of Applied Sciences Berlin (HTW) and the Goethe-Institut Gulf Region first agreed upon a comprehensive Memorandum of Understanding in 2013 which was to include exhibition development, museum education and professional development initiatives. The SAWA Museum Academy is the first ever explicitly transcultural capacity building program for current and future museum personnel in the Arab countries and Germany. The program is dedicated to the exchange of ideas on appropriate museum studies across continents and cultures to encourage learning from and with each other.

When the Emirate of Sharjah in the United Arab Emirates celebrated its nomination as Capital of Islamic Culture in 2014, the Sharjah Museum of Islamic Civilisation and the Museum für Islamische Kunst in Berlin fostered this cooperation with workshops and exchanges.

Most recently, March 2019 saw the launch of cooperation in the film sphere between the Abu Dhabi Music & Arts Foundation (ADMAF) and the Filmakademie Baden‑Württemberg in Ludwigsburg.

There are 15 university partnerships between universities and academic institutions in the two countries. There are officially recognized German schools abroad in Abu Dhabi, Sharjah, and Dubai. Since 2011 and 2012, pupils can earn the German International Abitur in Abu Dhabi and Dubаi, respectively, and since the 2014/15 academic year these schools also offer the Multilingual International Baccalaureate (IB).

In regard to bilateral cooperation in the area of Higher Education, some of the most important agreements between Emirati and German Universities are listed below: